It’s the last post for #TellMeAGhostStory. I’ve had a lot of fun with it, and I hope that you have, too. It’s only fitting that the last week end in a tie, and that I post them both. Both are based on real life experiences.

THE ‘LIVE’ IN BABYSITTER

by Shirley Deeds
She was sitting on the wicker couch with her nephew who was totally engrossed in his latest building endeavor. He had brought out his bucket of interlocking blocks and was trying to see how tall he could build the tower that was slowly approaching his own height. Her phone beeped again and she looked away long enough to receive yet another text message from her sister. She’d lost count of exactly how many messages she had received from her. Honestly, he was 5 years old. She’d been baby sitting him since he was an infant. When was her big sister going to finally trust her with him?

Her nephew glanced up at her and shrugged. It was almost as if he knew it was his mom. Again. It was getting close to lunch time and even though she knew he was too engrossed in his project to eat, she didn’t want to be accused of not feeding him

“Come on Thomas. It’s time to go inside so we can fix some lunch,” she told him.

“I’m not hungry Aunt B. We can eat later,” he told her without even looking up.

She sighed and resigned herself for the inevitable battle. “Thomas, you know your mom wants you to eat before she comes to pick you up. You guys have a lot of stuff to do this afternoon. Come on, let’s go inside.”

Thomas looked up at her and then glanced to his left. “You can go inside, but I’ll stay out here.”

She knew better than to leave him alone outside. He was a good kid, but he was also smart and fast. There was no way she was going to leave him outside by himself. The frustrating part is that he knew that. He was testing her.

“Thomas, you know you can’t stay out here by yourself. We’ll make a quick lunch and bring it back outside. You won’t have to stay inside too long, I promise.”

“It’s okay Aunt B, I won’t be by myself. Bobby is going to stay here and play with me,” he replied.

A chill made the hairs all the way up her spine tingle enough that she unconsciously rubbed her neck with her hand to brush the feeling away.

They were alone on the porch.

“He’s the little boy that used to live here,” he innocently replied.

“He used to live here?” she asked.

“Yeah. He lived here a long time ago. Until he fell off the porch and hit his head on a rock. He said that it hurt really bad, but it doesn’t hurt at all now.”

She tried not to show any emotion at all to Thomas. The last thing she wanted to do was make him feel like he was saying or seeing something that he shouldn’t. This wasn’t the first time that they had had a conversation like this. She never doubted Thomas. Mainly because she had her own personal experience as proof of the unknown. This was the first time that she had been around him when ‘they’ were actually there though. She wasn’t exactly sure how to handle it. She thought about it for a few minutes before she finally answered him.

“Well, that’s fine Thomas, but you still can’t stay outside by yourself. I’m sure Bobby will be here when you get back. We’ll only be gone for a few minutes.”

Thomas turned away for a few seconds and then turned back to his aunt with a grin.

“We won’t be alone Aunt B. Bobby was alone for a while too, but his mommy is here with him now and she said that she would stay with us until you come back out,” he stated in a matter-of-fact tone.

This time she couldn’t help but stare. How was she supposed to argue with this logic?

Simple. She picked up her phone and this time dialed instead of sending another text.

“Hey, I have a quick question.’ she began as soon as her sister picked up. “How exactly do I explain to your son that the mother and son ghosts on our front porch aren’t baby sitting material?”

I changed the names in my story, but itwas based on a real conversation between my grandson and my youngest daughter. This wasn’t his first ‘ghostly’ encounter, but it was the first real conversation he ever had with someone other than his mom – especially when it was happening. Some may say he has a super creative imagination, but I don’t think so. We live in a100+ year old house and two of my daughters have always ‘felt’ more than one presence here. In some rooms more than others. We’ve even had rooms that our dogs would refuse to go in from time to time. I don’t know if our houseis haunted, but I’m fairly sure that we are not always ‘alone’ here. I’ve often wondered if kids who have imaginary friends are really being watched over or visited by real entities that they are more open to seeing and believing in than adults are. Kind of a cool concept.

She startled awake after dozing on the couch waiting for a friend to pick her up. Something must have woke her, but after sitting for a minute, listening to the old hose settle, she realized it was nothing and started to doze again.

She popped her head off the pillow; and knew she wasn’t dreaming this time. Knowing her friends must be back to get her, she grabbed her purse and peeked out the window. No one was there. That’s odd.

Frowning, she thought to herself, “I wonder how they got past me and upstairs? I must have really been asleep!” She headed up the stairs, growing more and more anxious with each creaky step, as she realized there were no sounds of life up there. She gathered up the wisps of courage she had as she reached the top step, and peeked in every room.

They were all empty.

The only door left was the door to the attic. Her imagination got the best of her courage at this point, and she turned and bolted down the stairs, grabbed her purse, and darted outside preferring to wait for her friends in the cold January air than inside the house.

The house with the voices. That knew her name.

From Laura: It was New Year’s Day and I had spent the evening hanging out with some friends. We had walked back to the house because we were in no condition to drive. That morning (see? not everything creepy happens at night!) My friend had been picked up to go back to get the car so we could go home. I had fallen asleep on the couch while I was waiting, and heard “Hey Laura” – so I of course thought my friends were back. I looked around downstairs for a sec, and went outside, and no one was there. Shrugging it off I realized I must have been dreaming. So I sit back down on the couch when I hear – “Hey Laura, come here real quick!” That time I knew I wasn’t sleeping, so I again looked around downstairs and outside, not seeing anyone I thought maybe they had snuck past me and gone upstairs for some reason. So I went upstairs … and the air was so still and stuffy, I knew nothing had been up there recently. So I panicked and ran back downstairs, grabbed my stuff, and waited outside in 40 degree weather for my friends to get back. Yup, I am a wuss. 🙂 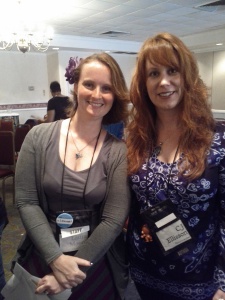 with CJ Ellison at Olde City, New Blood in Feb 2012

Where to find Laura:

6 thoughts on “#TellMeAGhostStory… Or TWO!”