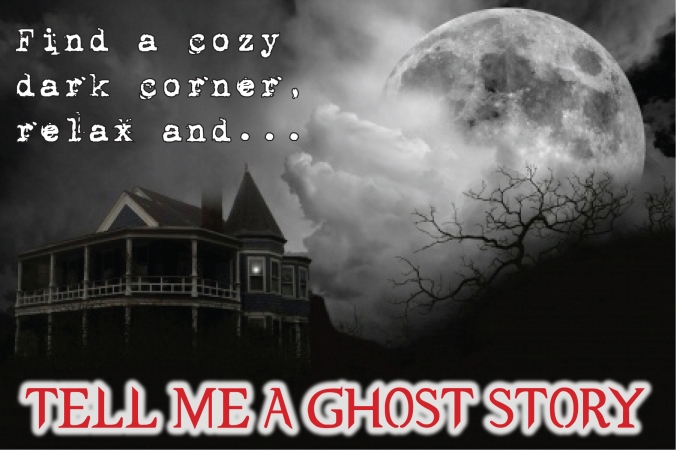 No? How about a ghost story? Come on! It’s all in the spirit of Halloween.

Last week, reader Amy had a few creepy experiences to tell on my FB author page, and this week she’s here to share them with the rest of you. So gather ’round and let’s hear Amy’s tale.

When I was a lil girl (4, I think) I was on my brothers lil league team. I was playing in the outfield, look to my left and I see my ma standing by her car watching us. A bit later, I look back over and don’t see her….I start to panic. But then I get a calm over me when I see my great grandad walking towards me, by the way – he’s dead. Don’t ask me how I knew (it was him), I just did.

Years later, we moved to house by the bay. Things would happen. Ma felt ‘a cold boney hand grab her wrist’ one night. We would hear footsteps walking up and down our hallway (old wood floor), 80+ year old home.

I walked thru the foyer into the living room (where ma and bro were watching tv). Ma gave me this look. I asked what was wrong and she says ‘you didn’t see that?’ Me -‘see what?’ She goes on to say that the 2 baseball bats that we had leaning in the corner stood on end and as soon as I walked thru the bats went back down.

1 night I woke to the feeling of being watched. I guess it was the feeling, but I did not want to see who it was. I just pulled the covers up and hoped it would leave me alone. Got up the next morning and told my ma. She tells me that my bro had the same thing happen to him the night before.

I saw a younger fellow standing at my window (in the room looking out). I thought it was odd that my brother had a friend over and why was he in my room? *my brother didn’t have a friend over*  He was there, then he wasn’t – no sound of him coming or going.

At a boyfriends house – in his parents bathroom getting ready to out for the night. looking in the mirror doing makeup/hair and I see my bf walk from 1 side to the other (behind me), I say something like ‘I kno I kno, I’m hurrying….’ a few min later he walks in, turns out it wasnt him that had walked behind me, but his granddad (dead, the house was originally his).

A few things since ma passed. 1 night (I wasn’t asleep and I wasn’t awake). All ma said to me (I did not see her, but more felt/heard); all she said was ‘it was not painful, I fell asleep and I love you’. Next thing, I woke up crying. Since the few months since she passed, I’d feared that she died alone/that it was long and painful.

She has sent me mess. in my dreams:

In the dream…I was at a book store. I started to walk. My arms are raised out (on the sides) and then not feeling anything grab or hold me…I was lifted up and carried swiftly to an isle and set down (I was lifted and carried, but then again I was also floating? walking? on a bed of feathers).

So, I was put back down and I was facing an angel figurine (set atop a bookshelf) and it was holding a little plaque that read ‘PROUD’.  (she and I would give this particular angel style to each other for gifts-it had been a long while since I had thought of them).

In my head I simply said ‘Thanks mom’.

A few mths later, we went camping with friends and this happened:
This morning we took our tent down and we were sitting on the picnic table waiting on our friends, when this woman walked by.
I see her and watch her, I whisper to hubs ‘that looks like ma’, he replies ‘I was just thinking that’. Everything about this woman was ma. From her reddish hair pulled back in a ponytail, to her white capri pants, to her stance, to her build, to her walk, to her chin! OMG! I watched her and I was wondering why ma wasn’t coming to talk to us. She looked more like ma’s TWIN than her actual twin looks to her (no offense). A few moments later she was in the passenger seat of a truck that went by and she even smoked! This woman was the exact image of what ma was about 10 years ago (which is how I remember her). NO JOKE! Not until after she had come and gone did hubs ask ‘did you take her picture? Because no one will believe us otherwise’. Do you know what??? No I didn’t take her picture, now I am wishing I had thought of it.

She came to me in a nap too (our final visit). We were driving her truck wasting gas (which is something we did often – when gas wasn’t stupid crazy). I was driving, she was the passenger. She was quiet and I look over at her and say ‘you aren’t coming back are you?’ She shook her head no. Ya kno what? THAT was her last visit (that I kno of).

A year later I got my 1st seriously huge forearm tat. It was Summer, It was stupid hot in the house. That night I was woken up because my arm was cold. It felt like an ice cold feather touch, touching the tat, following the lines of that tat.

These are just a few of my experiences. 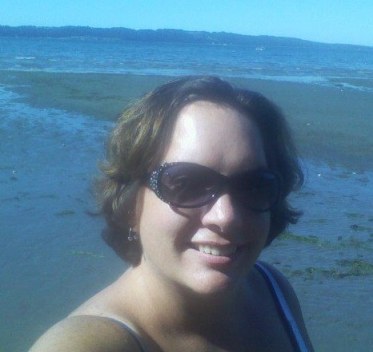 About Amy: I don’t know why, I just know I believe 100% in ghost / spirits / hauntings / the paranormal – I ALWAYS have and I ALWAYS will.

Ready to tell your own ghost story? It can be fact or fiction. Yes, you. You in the corner, hidden by shadows darker than night. Won’t you come out and play?

Tell the best ghost story and I’ll host you and your story on my blog next week. Here’s how it works:
1. ON MY FB AUTHOR PAGE, start off with a title, preferably in caps. Then tell me a ghost story of 999 words or less. Of course, it can be any story of the macabre, fact or fiction. Remember, tell me the story on FB, not here!

2. The story with the most Likes by Monday wins. I’ll announce the winner on my FB Author Page, and you’ll need to message me your email. Your story will appear on my blog that Thursday.

Tweet (best if you add your story’s title and your name as part of the tweet):
Read my entry& vote for me in #<span class=”hiddenSpellError” pre=”in ” data-mce-bogus=”1″>TellMeAGhostStory</span> http://on.fb.me/14XfEOp

Rules are simple: You must be the original author. Stories should be kept to 999 words or less. No links, no continuation posts, and stories must be complete (no to-be-continued, no stories requesting readers read the full story elsewhere).  Didn’t win? You’re welcome to enter again the next week.