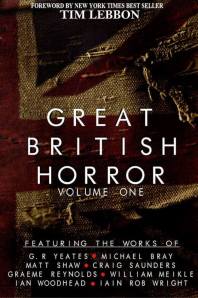 I’m a great fan of horror, so when a fellow writer mentioned there was a tour for the collection, Great British Horror, I jumped on it. Today, please welcome the talented and prolific Michael Bray. 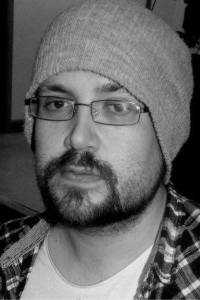 Michael Bray is a Horror author based in Leeds, England. Influenced from an early age by the suspense horror of authors such as Stephen King, and the trashy pulp TV shows like Tales From The Crypt & The Twilight Zone, he started to work on his own fiction, and spent many years developing his style. In May 2012, he signed a deal with the highly reputable Dark Hall Press to print and distribute his collection of interlinked short stories titled Dark Corners, which was released in September 2012. His second release was a Novella titled MEAT which was initially self-published before being picked up by J. Ellington Ashton Press. His first full length novel, a supernatural horror titled Whisper was also initially self-published, and following great critical acclaim, was optioned for a movie adaptation and sold to Horrific Tales publishing – his first Advance paying sale. 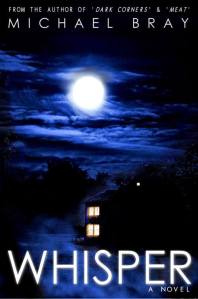 Short stories:
( * indicates currently unpublished works)
Observation Room 5
No Rest For the Wicked
The Prank
Yurple’s Last Day
Tina
That Gnawing Feeling
No 5 Sycamore Street
The Box
Every Little Helps
A Strange Affair
Victor
The Last Man
The Eye *
Scarecrows *
The Man In The Alley *
Faces *
Watchers*
Candyland*
Long Tall Coffin*
Cabin Fever*
The Birthday*
The Trial Of Edwyn Greer *
Jasper*
Grandpa*
Seat 6A*
50/50*
The Man Who Saw Spiders*
The End Of Everything*
The Benson Effect*
99.9AM*
Such A Quaint Little Ghost Train*
Chasing The Dragon*
Tilly*

What made you get together and set up this box set?
Well, we thought it was a good idea to get together and see if we could give a little something back. As authors, we are all massively appreciative of all of our fans and the support we get, and figured it might be a good idea to see if we could put something together which gave the reader a nice big sample of what we are collectively about. As authors, we are all incredibly committed to our craft, and once i heard some of the names that had been mentioned as taking part, for me it was a no brainer. It’s still a real honour to see my name up alongside these superb writers. It’s a very humbling experience.

Who chose this great charity and why?

There are so many worthwhile charities, and although there is never enough funding for any of them, we wanted to do something for one of the more ‘off the radar’ causes, that don’t generally get as much attention as the higher profile ones. Centrepoint is a great cause, and with luck we can really help to make a difference to the lives of young people who for whatever reason have found themselves homeless and in need of help. We are hoping that everyone gets behind us and really digs deep to help.

Which writer influences you the most?Like most writers in our genre, I grew up on an early diet of Stephen King. As I read more, I started to discover this whole treasure trove of other authors. Richard Laymon, Dean Koontz, James Herbert, Brian Lumley, Roald Dahl etc. I also got into reading some of the classic stuff like Poe and Lovecraft. I’m sure they have all influenced me in some way, although I never sat down and consciously tried to emulate any of them. I just try as best I can to put the images in my head down on paper and hope that people like it.

Is there a message in your writing you want readers to grasp?

No, not really. I think books should be an escape, a place to go to get away from the real world for a while. There are enough people out there trying to spread messages and force people to act in a certain way. My books are there for the reader to lose themselves in for a couple of hours.

You write horror, how much of yourself is hidden in the characters in your books?

I suppose a fair amount. Not consciously of course. As a writer, you always try to let the characters you create think for themselves, but I suppose on some subconscious level, each and every one of them is a part of the writer. In a way, the reader / writer relationship is incredibly personal. The writer is pretty much putting their innermost traits and quirks right there on the page for the reader to see and interpret.

What is the most difficult part of the whole writing process?

Keeping a regular schedule can be tough, especially with the general distractions that daily life can throw at you. Also, the rewriting and editing can become tedious after the umpteenth read through, but strangely, it’s also my favourite part of the process, so I’m not quite sure what to make about that. Really, the toughest thing is to make sure you stick to a regular writing routine. I usually do between a thousand to three thousand words per day and also spend a couple of hours editing or revising other projects. It’s ingrained in now, and something I do without even thinking about it.

Can you remember the first horror story and film you watched? What were they?

First horror story I read was actually a collection – Stephen King’s Skeleton Crew. Still one of my favourite horror collections. Film wise, the first one I remember watching was the original Nightmare on Elm Street.  It can still show a lot of the newer CGI horror fests a thing or two about tension.

Do you only write horror? If yes, why do you stick to horror genre? If no, what other genres do you write?

For now, I pretty much only write horror, although I do have an idea for a fantasy type series.  That one is actually all plotted out on paper, I’m just waiting for the right time to sit down and write it.

With the way horror is leading more towards the gore side of things, do you feel that it is losing the psychological aspect?

I hope not, or I might have to find something else to do!

For me, gore is all well and good, but for me, those books lose their shock value pretty quickly. By page fifty, the reader is so desensitised it becomes boring. I like to gradually make the reader feel uncomfortable and wind up the tension. Books should be like a rollercoaster, with dips and valleys. A lot of the gore books don’t seem to grasp the psychological elements that make a good horror book worth reading. I would be willing to bet that a writer with a good grasp of how to produce psychological tension could make a reader feel more uncomfortable with little to no bloodshed than some books which throw blood and gore around on every page.

Is there anything else you’d like to tell us about yourself and your books?

Normally I would insert a plug here, but that’s not the purpose of this interview today. Instead, I’ll ask everyone to go out and pick up the Great British Horror box set, and help us to raise as much as we can for Centrepoint.