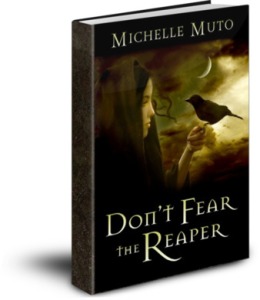 It’s finally up on Amazon!

In case you missed the description:

Grief-stricken by the murder of her twin, Keely Morrison is convinced suicide is her ticket to eternal peace and a chance to reunite with her sister. When Keely succeeds in taking her own life, she discovers death isn’t at all what she expected. Instead, she’s trapped in a netherworld on Earth and her only hope for reconnecting with her sister and navigating the afterlife is a bounty-hunting reaper and a sardonic, possibly unscrupulous, demon. But when the demon offers Keely her greatest temptation—revenge on her sister’s murderer—she must uncover his motives and determine who she can trust. Because, as Keely soon learns, both reaper and demon are keeping secrets and she fears the worst is true—that her every decision will change how, and with whom, she spends eternity.

The explanations flowed from him so easily, the how and why of things. But I didn’t want to accept any of this. I couldn’t stop thinking of my life, much less understand the complexities of an afterlife. I shouldn’t be here exchanging pleasantries with the one person who personified the thing I hated most—death. My death.
All I wanted was to find some way to go back in time. I shook my head. Hope was for the living. Not the dead.

And just so the song will stick in your head like it does mine:

Read more of Don’t Fear the Reaper or check out my other books at these retailers: